Nadine Ghosn: the Evolution of an Unexpected Jewelry Designer.

When Nadine Ghosn wandered into a local neighborhood jeweler in Beirut to buy a gift for her sister a few years ago, she never expected it would be propel her into becoming one of the most sought after jewelry designers. 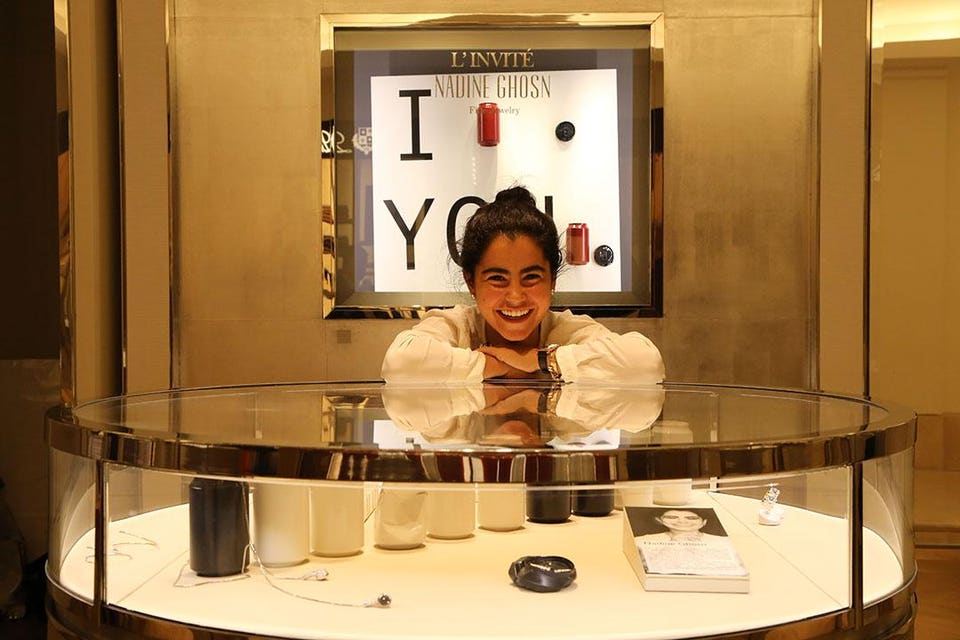 Photographed at her pop up launch at Le Bon Marché in Paris.

As Ghosn, pronounced “go-in”, explained, she had struck up a conversation with the owner of the store, a renowned Lebanese manufacturer who was running a sizable jewelry business. He informed her that many of the craftsmen, who were working with traditional tools and techniques learned from previous generations, were leaving the company to find jobs elsewhere because of the downturn in business, taking with them their time honored methods of jewelry making.

For Ghosn, who has a lifelong fondness for jewelry, this was unfortunate news.

“Jewelry is kind of like a photo album in the sense that when I go into my jewelry box, there’s always a piece that represents a moment in time, a person, or a memory.”

After graduating from Stanford with a degree in Economics and Art, Ghosn gained an insider view of the luxury jewelry business during a Management Retail Program with Hermes at their Paris headquarters, while completing a tenure at Boston Consulting Group, where she had focused on the business of luxury. She observed that the jewelry markets were mostly monopolized by heritage brands and fragmented in its offerings.

On a month long break from negotiating a job offer, Ghosn went to visit her mother where she had met the Lebanese manufacturer, and realized an opportunity for both her and the jeweler. 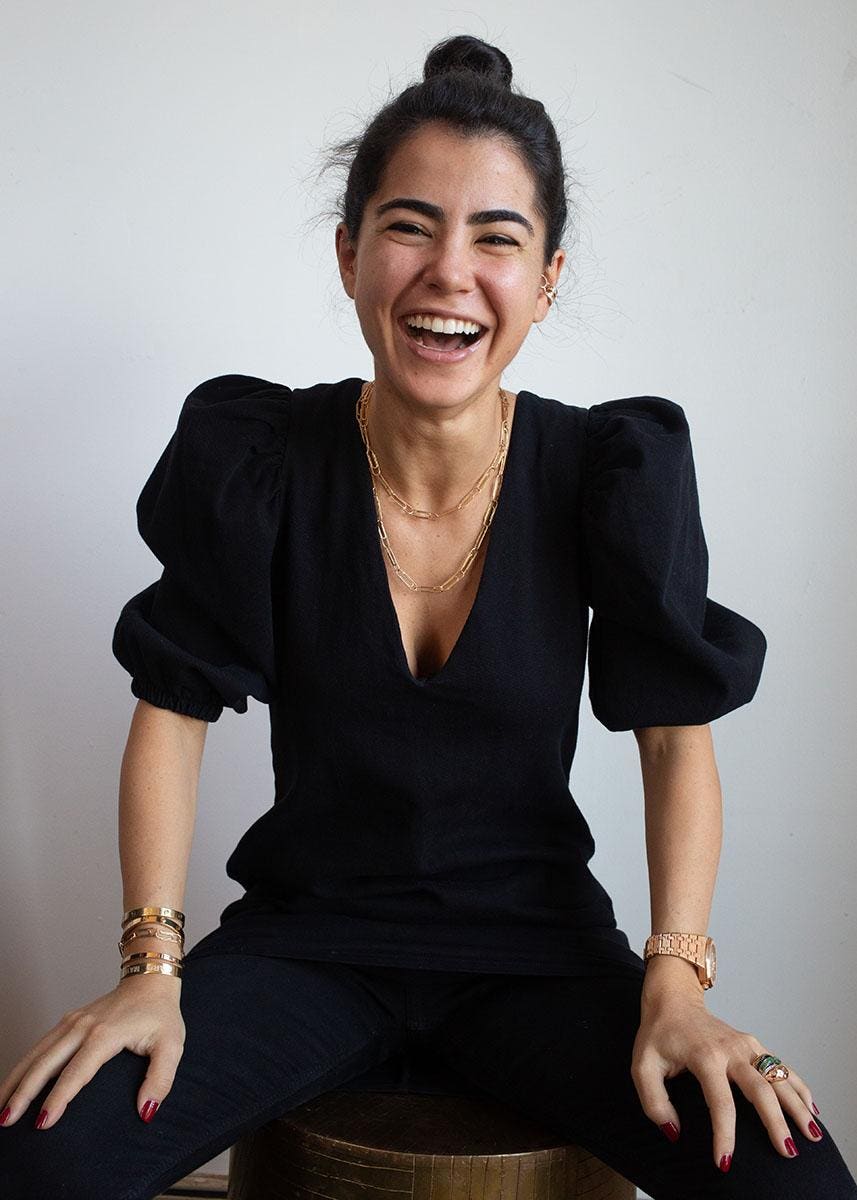 Without any formal training in jewelry design and declining a lucrative job offer from a heritage French brand, she approached the manufacturer with an offer to collaborate: he would teach her the process of creating jewelry and provide the knowledge and the craftsmen to launch her collection in exchange for a promise of specific volumes of business, thereby preserving his artisans’ employment and their rarefied skills.

“ There’s a social impact in terms of retaining craftsmen, and supporting their skill set,” explains Ghosn, a lesson she learned from Hermes, when the 2008 economic downturn affected the luxury market. “They were looking at the long term and it paid off,” says Ghosn of Hermes’s decision to safeguard their in house craftsmen, instead of letting them go.

At 25 years of age, and with “nothing to lose,” she began an immersive education in January 2015 with the manufacturer along side the craftsmen in the atelier and then completed the education with a course at the Gemological Institute of America in California. She immediately returned to Beirut where she designed her first collection in a single day, turning to pop culture as an inspiration.

In presenting her novel collection to the traditional manufacturer, Ghosn was met with hesitation from the craftsmen in creating pop culture pieces into fine jewelry. It was something they didn’t understand, but she managed to convince them to finish the pieces and prepare them for its debut.

Using Instagram as a platform, she chronicled her journey from the beginning, allowing a rare and intimate look at a designer as she launched her new business, a connection that invited her friends and clients along for an unexpected journey on building a company. It paid off in recognition, sales, and followers that DM,(direct message), her with questions, direct feedback, anticipation, and praise.

“ Previously, luxury was about preserving an image, and now it’s more open, expansive and transparent. I used it as my journal and it was very much a vulnerable position, but also a dialogue,” says of her Instagram strategy, explaining the importance of being accessible and authentic.

2017 was a seminal year for Ghosn, having won the Innovation Award for her Veggie Burger at Couture, the annual industry jewelry trade show held in Las Vegas during her inaugural participation, and winning the DDCF award, sponsored by Vogue Arabia in the category of high jewelry, with a with prize of $250,000, an opportunity to sell their Spring 2018 collections at Harvey Nichols in Dubai, and Bloomingdale’s Kuwait; receive a high-level mentorship; and an advertising campaign promoting their retail launch. 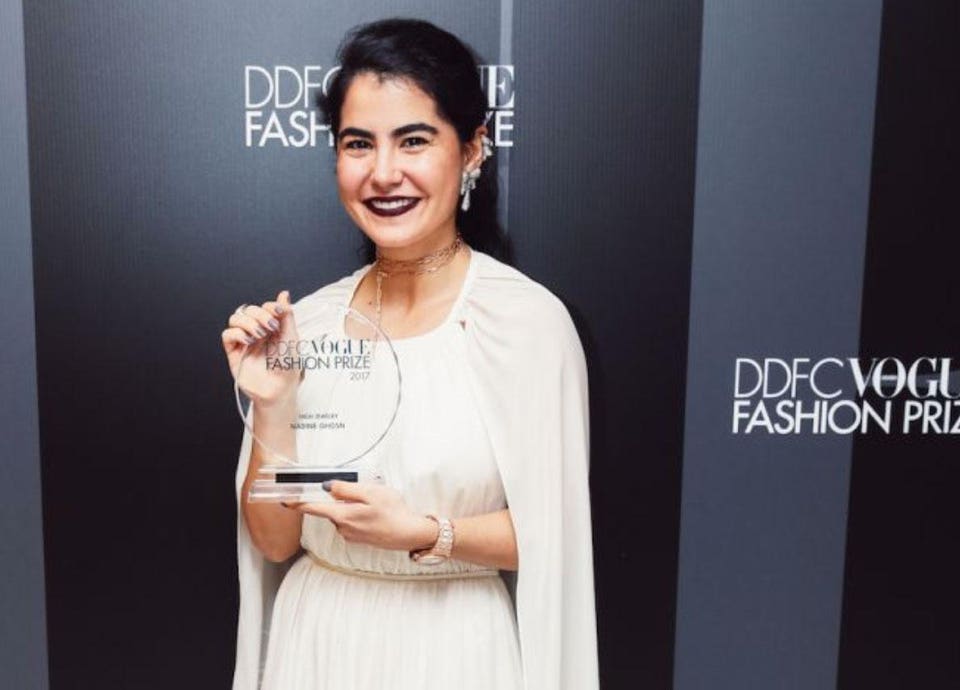 On the heels of her awards year, a large commission came from an unlikely client, McDonald’s.

In 2018, McDonald’s launched a contest on Valentine’s Day encouraging their customers to share, via social media, their love for their signature burger, the Big Mac. The winner would own Ghosn’s Bling Mac, a one of a kind hamburger ring designed to the specifications of the Big Mac recipe: two patties, special sauce, lettuce, cheese, onions, on a sesame bun. Designed under the watchful eye of McDonald’s IP team to ensure accurate representation, Ghosn delivered an eight ring creation of champagne diamonds, orange sapphires, white diamonds, and other gems between two 18K gold, diamond studded “buns.” Ironically, one of her clients won the ring. 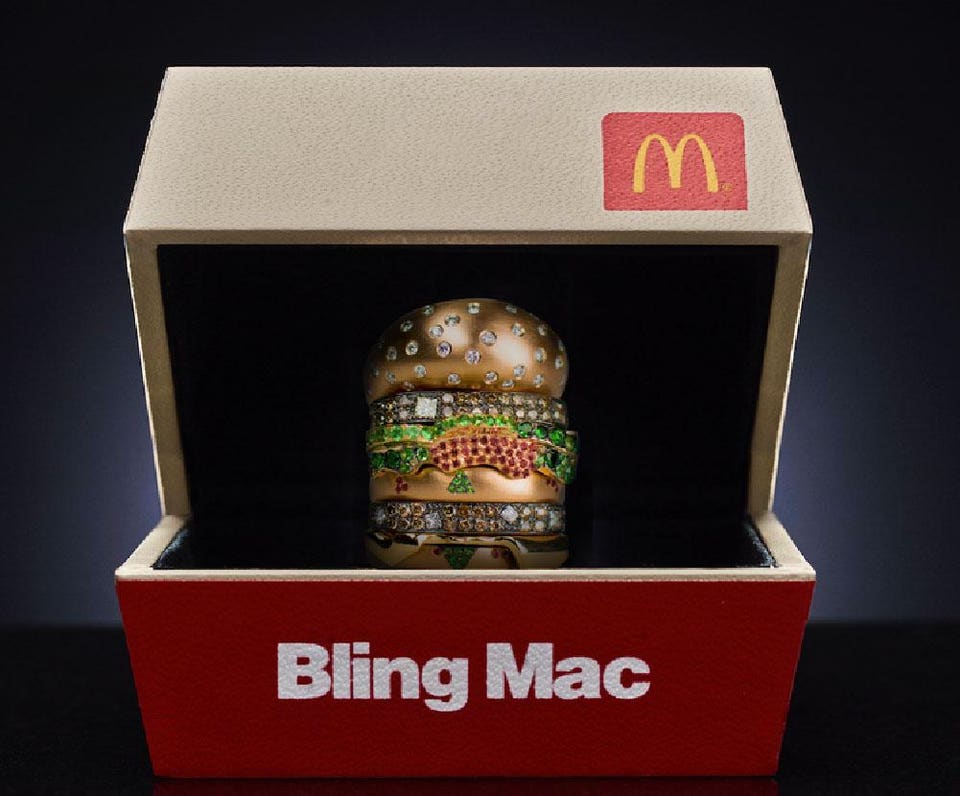 One of a kind Bling Mac

Retailers soon followed suit with Colette and Le Bon Marche in Paris, who offered her a pop up store to launch her collection. With a minimal budget, Ghosn created an eye-popping presentation with spray painted soda cans to display her boldly whimsical pieces. 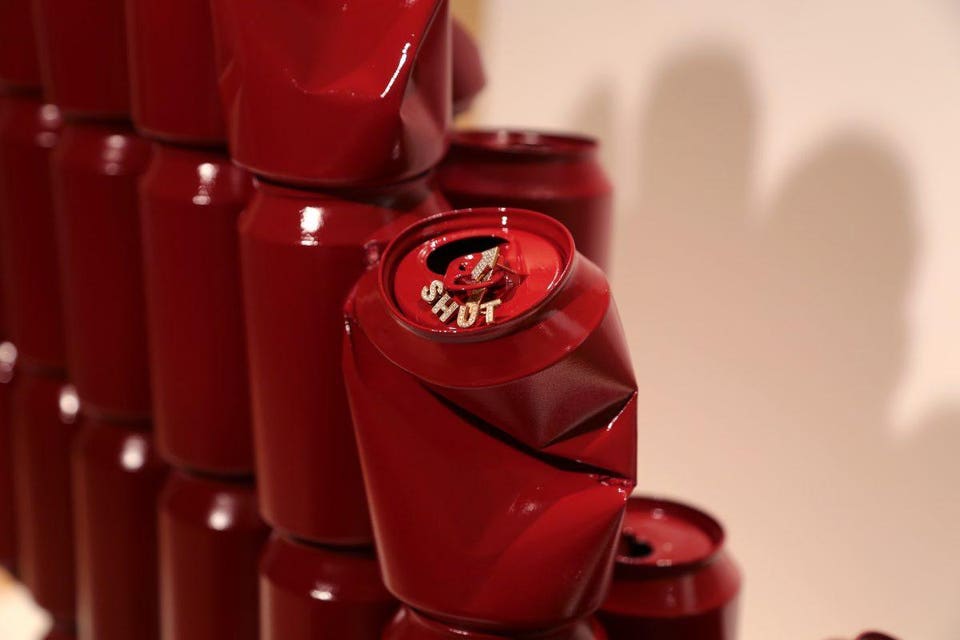 It was at her display at Le BonMarche that caught the eye of Beyoncé, who bought the “Shut Up” earrings and was seen wearing it on social media. Another influential moment was when Karl Lagerfeld donned her bedazzled headphone necklace. 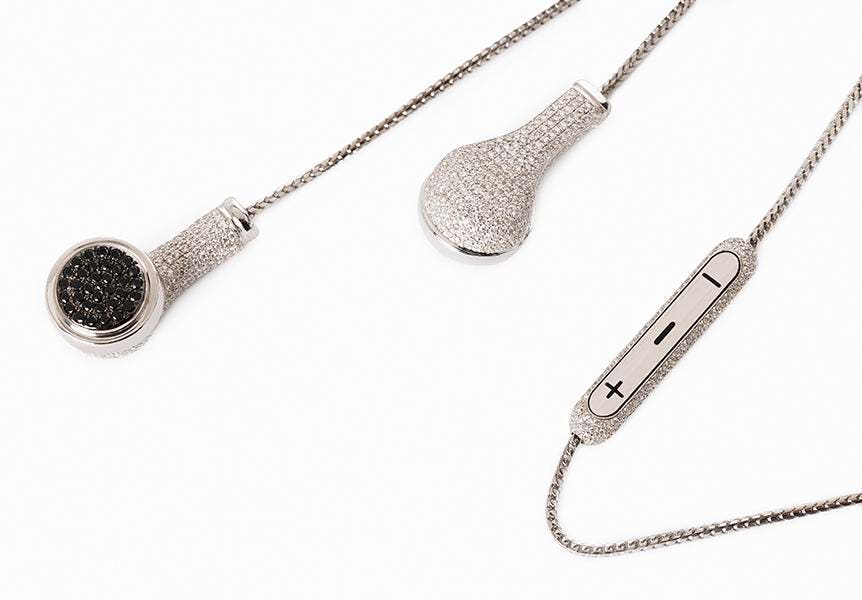 In keeping with her brand DNA, she launched her whimsical second collection with a series of sushi pendants wearable both as a bracelet or necklace. 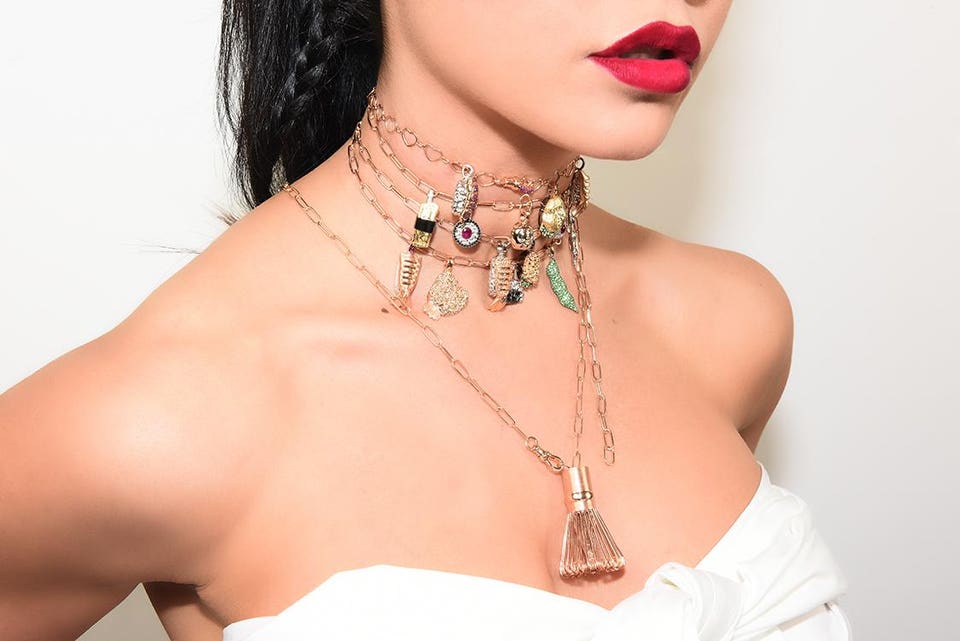 As demand for Ghosn’s pieces grew, her one-woman company required her to globally search for new manufacturers in producing newer collections, one that has led her to new relationships in Thailand and Italy. However, she still remains loyal to her Lebanese contact, where they no longer doubt her design aesthetic and are proud to boast about celebrities wearing their creations.

Currently, her company runs without any marketing or PR and Ghosn still travels extensively making her own appointment with retailers, a hands on strategy that she prefers and wants to continue, even as she scales up. But for now, keeping her company lean with a workable pace of delivery works for her.

“ I’m trying to set up a backbone that’s a strong foundation, so building steadily and growing organically is the trend I want to keep,” says Ghosn.

This week, Ghosn will be launching her third collection with an intimate brunch in New York on May 8th, followed by Paris, and then London, dates yet to be announced.

And while she is keeping her third collection under wraps, Ghosn does confide that it will be in keeping with the brand DNA in its bold quirkiness while elevating recognizable items to a luxury level with an added bonus of a collaboration with a non-profit.

“ I believe when you’re passionate about something and you’re curious enough to see it through a different perspective, you don’t stop at every obstacle that comes your way.”

an designer Evolution Ghosn: Jewelry Nadine of The Unexpected

Previous Story:
A showcase of designs for the modern bride